Note: Although this creator was known as "Lainey" on the channel when it was active, his name is Kai now and will be referenced as such in this article. This will be directly referenced in the entry a few times. 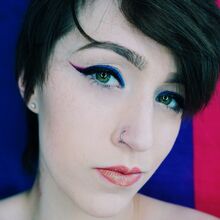 Beautybot (created September 1, 2017) is a channel owned by Kai (then Lainey) and was run by him (identifying at the time as them/they/he/him). It is dedicated solely to skincare videos and makeup tutorials. The channel was created due to viewer demand and because Kai did not believe everyone wanted to see beauty and blog videos on the same channel. After the 2018 Halloween season was over, Kai ceased uploading on the channel.

The channel was subject to much criticism and not many views. During the end of 2018, Kai's gender, or lack thereof, heavily veered toward the male side, which does not stereotypically wear makeup, and later Lainey identified as a male named Kai, all which may have been factors in stopping the channel.

In 2019, Kai uploaded a video to Laineybot where he made fun of his beauty videos and critiqued them, much of the time being self-depricating. In the video, it was revealed that part of the reason the channel ceased releasing videos was because he did not think he was good at makeup. One of the most heavily critiqued videos, a video about transforming into a Halloween clown, was the last one on the channel and not only heavily criticized by viewers, but also Kai in the video.

Retrieved from "https://onision.fandom.com/wiki/Beautybot?oldid=7576"
Community content is available under CC-BY-SA unless otherwise noted.